Breaking down the Story of Separation with Communities of Conversation 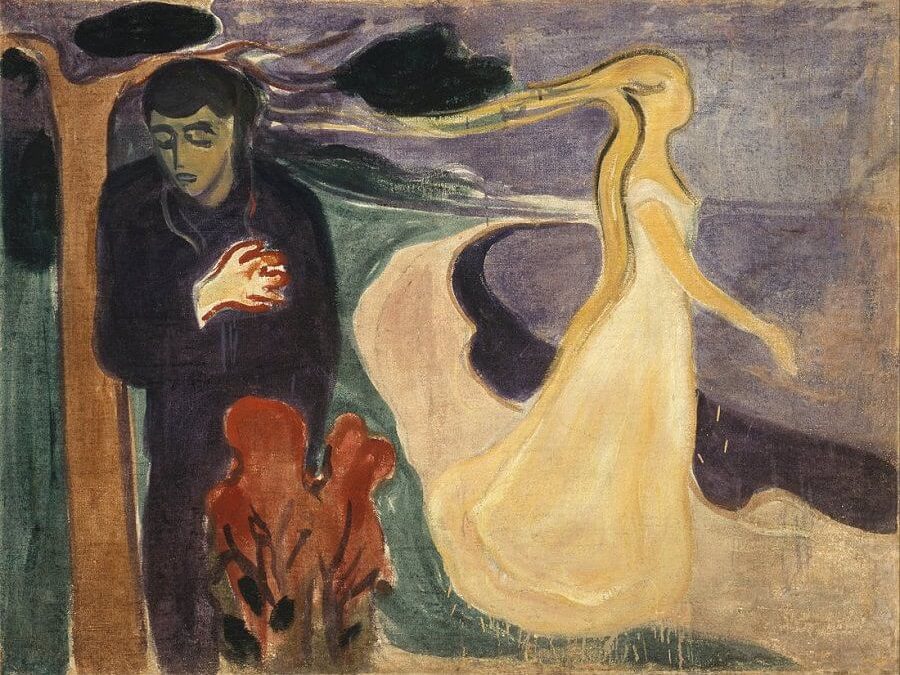 Can we tackle global challenges such as climate change, biodiversity loss, or inequality without breaking down the story of separation? Is creating communities of conversation a starting point?

There is a growing awareness that humankind is facing unprecedented challenges. Although climate scientists and sustainability practitioners have been banging the drum for many decades and have done so much good work, the public awareness stimulated by activists such as Greta Thunberg and Extinction Rebellion has shifted public attention to a new level through their focus on the climate emergency.

The growing awareness is often swiftly followed by overwhelm at the challenge of solving hugely complex, interconnected issues like climate change, the food system, agricultural production. We are aware that many of us are woefully under-skilled to activate the transformation needed to design a regenerative economy that ensure the continuance of human society.

The challenge we face is underpinned by three fundamental stories of separation: of humans from nature, humans from other humans, and the very deep patriarchical design we have embedded into our social systems for decades which separated men and women by gender.

The good news is that we can all find ways to create a new regenerative econmy if we can make a deep cultural shift in our behaviour. One which reunites the patriarchal (masculine) design with the matriarchal (feminine) values and behaviours that are inherent in all people and genders. One which recognises that continuing the patterns of division and conflict in times of existential crisis can only ever be a distraction from the real necessity to tackle any existential threat.

We have designed our western social systems based on our most fundamental human difference—the difference between female and male – and on our separation from nature giving us a role as dominator over all other living things. This is a narrative that is ancient; is woven into most historical religious texts such as the Hebrew Bible where it appears in the very first chapter of Genesis in the story of dominion.

Historically traits and qualities that are considered inherently ‘male’ are valued over those qualities and traits that are considered typically female. Asserting dominance of one gender over another was swiftly followed by adopting a ranking system in other social fields such as by nation, ethnicity, race, religion and even mindset.

Otto Scharmer speaks to the story of separation by clearly showing the outcomes of that story unfolding in our ecological disasters, social breakdowns and human psychological crisis in his seminal work, Leading From The Emerging Future, although he did not highlight the specific challenge of the male/female divide with the social divide model.

In patriarchical (also considered dominator by design) societies, design lends itself towards hierarchies where control, status, and privilege drive advancement. They often reward those at the top of hierarchies with privilege, additional rights and freedoms, extended wealth whilst those at the lower end of the hierarchy have dwindling access to opportunities for advancement. We’ve seen these societies develop in the West for thousands of years including the Roman Empire, the Roman Catholic Church, the medieval baron land grabs, the industrial revolution and the way in which modern global corporations are designed.

In his seminal work Reinventing Organisations, Fred Laloux used integral developmental theory to frame a story of psycological development through colour-coded progressions of these forms of culture in organisational design. It is not difficult to see the patriarchical story in the progression of humanity through impulsive red, conformist amber, achievement orange towards pluralistic green – where our possibility for returning to wholeness first emerges – and onwards to evolutionary teal.

Systems scientist, writer, and social activist Riane Eisler, has however proposed that we ought to understand human cultures and societies in terms of two fundamental categories: “dominator” and “partnership.” In her landmark work, The Chalice and the Blade: Our History, our Future, she suggests that our conventional social categories—religious vs. secular, right vs. left, capitalist vs. communist, Eastern vs. Western, and industrial vs. pre- or post-industrial, etc.—are insufficient to describe the whole of a society’s values, beliefs, and institutions.

These cultural designs have been fundamental to the global ecological and psychological crisis we now find ourselves in. Reconnecting all the levels of the story of separation are fundamental to our resilient, thriving future – including gender, humans and nature and our own deep relationship to self.

“Most of us have also, at least intermittently, experienced another way of being, one where we feel safe and seen for who we truly are, where our essential humanity and that of others shines through, perhaps only for a little while, lifting our hearts and spirits, enfolding us in a sense that the world can after all be right, that we are valued and valuable.

Our human yearning for caring connections, for peace rather than war, for equality rather than inequality, for freedom rather than oppression, can be seen as part of our genetic equipment. The degree to which this yearning can be realized is not a matter of changing our genes, but of building partnership social structures and beliefs.”

By creating a global culture of communites of conversation to heal the story of separation one conversation at a time, we can all participate in this enormous endeavour. We can make that choice by being mindful every time we speak, and every time we act to chose:

How does conversation help to redesign society and organisations?

I think it was Margaret Mead who said ‘a conversation is the smallest unit of change’. Conversation is the lifeblood of a thriving society, organisation, group, community or even meeting. If we are unable to hold conversations about things that matter to our future, we are never going to be able to solve the complex challenges we face. For most of human history, conversations and storytelling has served as a way of learning about the world around us. They help people make sense of what is happening, to explore the unknown, persuade others, connect the dots between different ideas, and heal divisions.

In times of turbulent change, the one thing despots and populists who arise in such times try to control as much as the military, is conversation. They know the absolute risk of conversation to the control the state or the dominating forces of the day wish to exert. Tis is why social media platforms such as Facebook are so valuable – they offer a vital opportunity to manipulate narratives. Keeping the conversation to the theme of division and difference is one of the strongest ways in which despots control behaviour.

Therefore, the purpose of holding conversations about our differences is to create a forum for sense-making where we can learn about what binds us to the story of separation and to allow us to see each other and our world more clearly and with greater perspective.

There are many different kinds of communities of conversation that people, business and communities can adopt to begin to build a regenerative economy and culture. From using simple circle practices around subjects on which people disagree at work, to people’s and citizens assemblies, all the way up to truth and reconciliation commissions. All of these are designed to give space to conversations and examinations of difficult subjects on which people disagree, in which there is conflict to be resolved or difficult decisions made, in a participatory and democratic process.

The most determined model that stands in my mind in modern times is always the Truth & Reconcilliation Commission in South Africa which was stewarded by Nelson Mandela and Dr Desmond Tutu. The Register of Reconciliation gave members of the public a chance to express their regret at failing to prevent human rights violations and to demonstrate their commitment to reconciliation. Mrs Mary Burton, the TRC Commissioner who proposed the establishment of the register, explains:

‘The register has been established in response to a deep wish for reconciliation in the hearts of many South Africans — people who did not perhaps commit gross violations of human rights but nevertheless wish to indicate their regret for failures in the past to do all they could have done to prevent such violations; people who want to demonstrate in some symbolic way their commitment to a new kind of future in which human rights abuses will not take place.

‘We know that many South Africans are ready and eager to turn away from a past history of division and discrimination. Guilt for wrongdoing needs to be translated into positive commitment to building a better society – the healthiest and most productive form of atonement.’

Imagine what something similar could do to heal the divisions caused by Brexit? Or by long standing gender issues we face? Or as a base for action by corporations who continue to use colonial business models which extract wealth from the poorest and keep it for the wealthiest? Or as a model for acknowledging the damage the global north has perpetrated on the global south?

In the UK we are seeing a surge in peoples and citizens assemblies where local councils and governments are sharing key future policies – often on climate change – with the public. At these assemblies evidence-based research is presented, combined with potential trajectories and policies which are debated openly by randomly selected members of the public. As yet they are not binding discussions, but they give a new opportunity for transparency and participatory conversation which helps healing.

How to get start building communites of conversation

We can start with simple circle practice on non-contenious subjects. In a circle no one person has dominance, we are all equals. When Ed Catmull at Pixar noticed that all company meetings which gathered around the expensively crafted boardroom table bought by Steve Jobs, till felt and behaved in a hierarchical fashion, he got rid of the oblong item in favour of a round one which had an immediate effect. So you might want to consider changing the boardroom table.

In the simplest circle practice each person takes a turn to speak which is limited by time. It gives each individual an opportunity to speak their mind without interruption or be dominated by louder, more confident or zealous voices. As importantly, it gives everyone else an opportunity to learn to listen. Once you have the hang of simple practice, you can add more layers such as hand signals and note-taking to your conversations.

It’s worth having some guidelines. Here are some I’ve borrowed from Riane Eisler:

When you are ready to move onto more contentious subjects, or you want to convene a group in your community or business about the way forward, it’s always worth first organising some exploratory conversations which are guided by pre-produced questions or professionally facilitated. Here are some examples of questions we use in the Climate Campfires.

Here are some of Riane’s suggestions for conversations around gender divides:-

If you would like to host community of conversation about difficult subjects – be that gender, climate change, the future of work, the future of food systems, the future of ownership models – in your business, but would like them to be professionally designed and facilitated at first, you’ll find more information at for organisations in Sussex at The Really Regenerative Centre CIC on Climate Campfires and Ecology