The Barcombe Doughnut – a snapshot 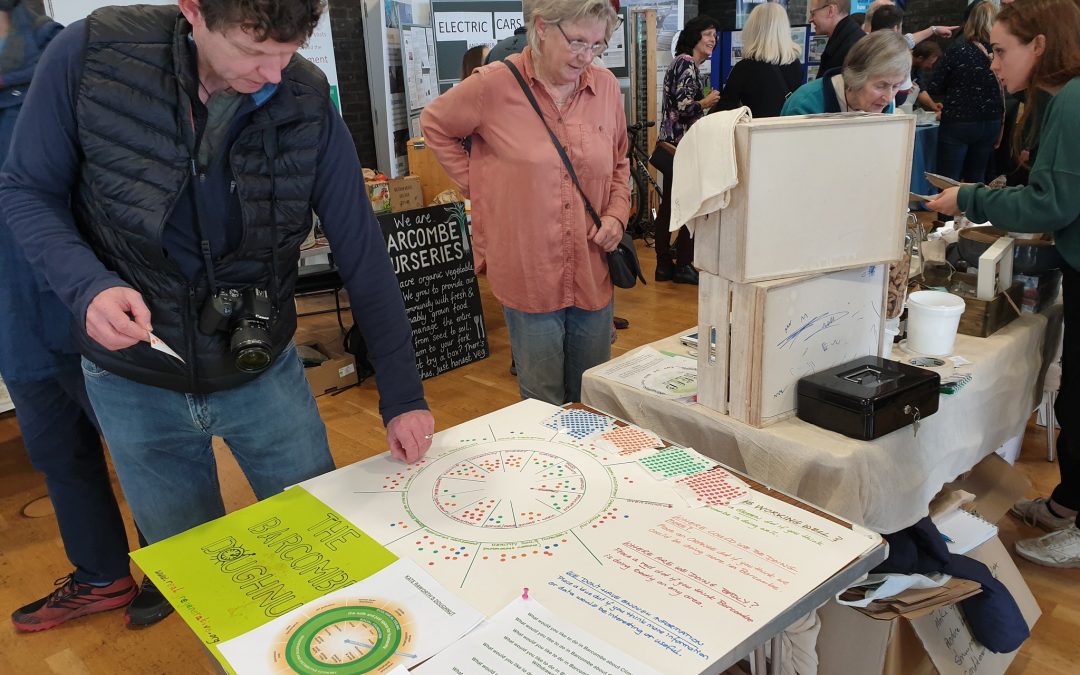 On Saturday 7th March we were invited to Barcombe Eco Fair to take a snapshot of the community’s response to the Doughnut.  Barocmbe is a small village just north of Lewes in East Sussex, with a population of just over 750 according to the 2011 census. Barcombe itself is the older of three settlements in the parish which include Barcombe Cross and Barcombe Mills which the River Ouse flows through.

As we were setting out our stall, the Doughnut immediately caught the imagination of other stallholders and dots began to fly around the social and ecological ceilings, as residents began to share their achievements and concerns for the village cluster. By 1pm the Barcombe Doughnut was taking shape and by 2pm we were seeing clear indicators for areas of concern.

On the right you can see some of the comments and thoughts about different categories. But what was immediately apparent was that there are some general areas where Barcombe feels it’s ‘doing well‘. These include education, health and food on the social circle and air quality on the outer circle.

Food was particularly interesting to us. It does cover a wide spectrum of issues, but often we’re looking at how resilient a village is in terms of growing its own food.  Does it have enough allotments? Does it have a local farmers market or is there good local access to organic food? How dependent are the inhabitants on national grocery chains like Sainsbury and Waitrose and how proximate are those to the village? What was particularly interesting in Barcombe was how often villagers told us they felt they could put a green or at least orange dot on Food because of the presence of Barcombe Nurseries. We’ll be keeping an eye on similar feedback from other villages. Is this something all rural villages should have? 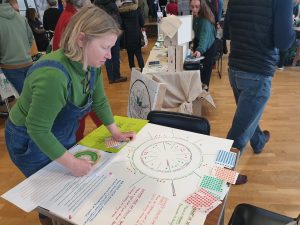 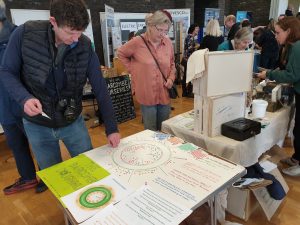 There are also some areas where Barcombe clearly feels it isn’t doing well. Transport stood out as a clear issue as it gathered a lot of red stickers. Concerns ranged from older people who were worried about how they might get around when they have to give up driving, to the lack of reliability of services for those who commute into London, and the challenge having to travel to a doctors surgery or chemist. Whilst it may not come as a surprise to anyone who lives in a rural village – the challenges of public transport are well known – it’s still valuable to see it consistently rise to the top of issues across many villages. That means when we do our more in-depth workshops, we are starting to surface ideas and solutions.

Energy also came in for mixed attention with equal amounts of red and orange dots. Most commentary centred around the fact that Barcombe homes mainly use oil-fired central heating. However we hear on the grapevine that Barcombe is in for a pleasant surprise soon!!

In the outer ecological rim there were more areas of concern than inside the social circle. Chemical pollution, water extraction, soil health, biodiversity loss and climate change all received a mix of red and orange dots and topped the areas of concern. Concerns about chemical pollution were linked to water, biodiversity and soil health in the minds of many residents who cited the regular scent of chemical applications to the agricultural soil and crops by which the village is surrounded. Many people expressed an interest to learn more about these areas to either confirm or ease their concerns. Having access to more information about how water extraction is managed in the area and about the general level of health in the surrounding soils were popular ideas. This sounds like very fertile ground for more conversations, ideally with local farmers and water management companies in a mutual exploration.

As with other villages, there were many themes where there were mixed responses.  Many people thought there was too little affordable housing in the village, but by contrast there was also concern about how little land is available to build on and whether local systems could support a growing village. In terms of equality and social mobility, there was recognition that the village is a ‘privileged’ community, but that nevertheless there is still a lack of connection across generations, and not enough support for older, single people.

Water is always interesting. Of course we all have access to clean drinking water. What is apparent is that the pattern of what arrives from above is changing and causing issues for the community through flooding of lanes and roads. There was very positive support for the work of the Ouse & Adur Rivers Trust in ‘re-wiggling’ the river and streams to help mitigate problems of flooding.

How the Doughnut Snapshots work

When we are gathering information in snapshot mode, we are just looking for rapid insights into how people feel about the social and environmental categories we put in front of them.  For the evironmental ceiling we stick firmly to Doughnut designer Kate Raworth’s model and use the Stockholm Resilience Centre’s planetary boundaries as our categories. To make them more accessible to people who may not be familiar with terms like nitrogen and phosphorous loading, we transpose with Soil Health & Degradation.  For the social categories, we select a range of 12 that we feel are most likely to be of interest to the village we’re visiting. In a more in-depth workshop, we start by allowing the village to select their own choice of social categories from a wider range crowdsourced by Kate from the UN Sustainable Development Goals.

During 2020 we hope to attend enough events across East and West Sussex to run up to 40 Snapshots and 20-25 Workshops, after which we will publish a report which we hope will help to build the evidence base for action for rural communities.

If you have an event between now and the end of October 2020 to which you would like to invite us, please do let us know. We come to villages right across Sussex. If you would like to fast-forward straight to a Doughnut District workshop, we’re equally delighted. You can contact jenny on jenny@reallyregenerative.org who will sort out a date and time with you.