An Economy of Place Part 8 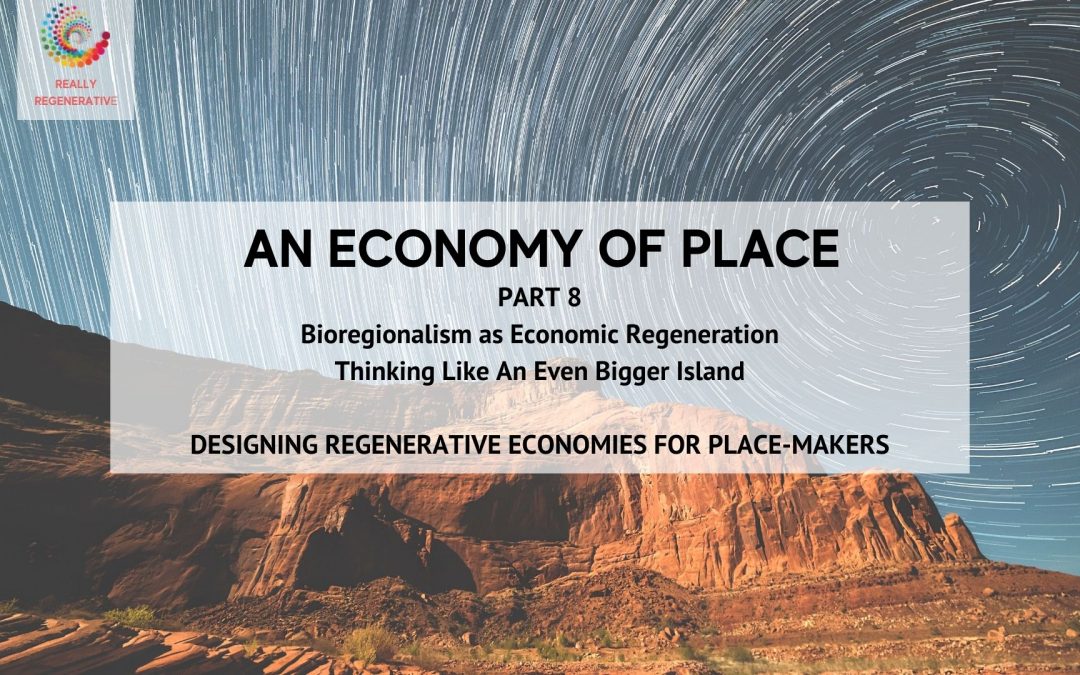 Bioregionalism is systemic approach to societal design based on the belief that human activity should be largely constrained by ecological or geographical boundaries rather than political ones. It’s also a recognition that our globalised economy that is so dependent on fossil-fuels is inherently unstable, unresilient, destructive and finite — in that it eventually depletes its own fundamental resource whilst destroying its own environment. Green economists have long advocated that a long-term sustainable economy would have its roots in local self-reliant communities that, where possible, meet their requirements within their own boundaries.

The roots of the bioregional movement grew in the late 19th century and early part of the 20th century through pioneering urban planners like Sir Patrick Geddes, who developed a new approach to regional and town planning based on the integration of people and their livelihood into the environmental characteristics of the particular place and region they inhabit. The term was coined by Allen Van Newkirk, founder of the Institute for Bioregional Research, and supported and developed by people like Peter Berg, Raymond Dasmann, David Haenke and Kirkpatrick Sale.

What do we call an inland ‘island’? Mostly the popular term is a ‘shed’ of some kind. A watershed, a foodshed. Or a bioregion. Watersheds or bioregions have distinct geography, geology, topography, botany, wildlife — and culture. In the minds of bioregionalists, the culture and the nature of the region are not separate entities, but entwined. The culture grows from the nature, and the nature is the culture.

At a very simple level we can experience this in the design of working hours in hotter climates compared to more temperate climates, or to places that have long hours of light and dark near the polar circles. A mid-afternoon siesta still feels a bit daft in the UK but if I’m working in Spain or Portugal it feels totally normal and in keeping with the flow of life there.

There are some very obvious things that don’t need designing, that happen naturally. You don’t often find an entrepreneurial community built around marine tech or oceanography located on the Mississippi or Volga rivers in the middle of land-locked landscapes. Or agricultural learning centres on actual islands or archipelagoes where there is minimal land for cultivation.

But what does that mean for designing economies of place in our modern world?

It invites us to consider what is appropriate for our region; what our natural industry and expertise should encourage us to develop. This is of course easier when you’re a region with huge natural resources, like Russia with massive wheat and oil fields, and a huge mining sector. Or rich in forests like Finland so you have a natural wood and pulp industry. Or you are on a coast with the obvious potential for fishing, marine tech, exports or perhaps tourism. And isn’t this how we’ve designed our economies anyway? Over time?

We can quickly see even with these two examples, that doing what comes naturally — utilising the natural resources available — can also still lead to extraction. So there has to be something else we look at and consider too.

Those other principles are carrying capacity, fair share, sufficiency and optimal health across the key factors that impact our potential to live in balance with planetary ecosystems. These are People Capacity, Biodiversity, Food, Water, Energy, and Land. In other words, successful bioregional design allows all life to flourish in complex balance in a contained space. It requires a very different approach to how we choose to inhabit our places of the world. It invites us to ask questions like:-

And a great many more! Of course a great deal of these issues are already designed into our western economies in different ways. Farmers are allocated a restricted amount of water they can use for irrigation from waterways that run through a region. Water companies have adapted designs to be able to pump water from one part of a region to another to adapt to fluctuating demand. Technology is allowing us to become evermore effective in minimum use of water from designing jeans with less washing, to designing washing machines that use less water.

But in our economic strategy development, we don’t start from a perspective of a balanced and healthy ecosystem, we start from a place of designing for growth and employment. Until we move away from focusing on the central pillars of capitalism — exchange, profit and capital accumulation — towards activating the potential of people and place in a regenerative process, a bioregional economy cannot truly come to life.

So some fundamental principles:-

We’re going to explore each of these principles in later posts but that’s the fundamental task. And now we have a big, new question.

What kind of qualities, skills and capacities do we need to develop in economic society to enable these kind of radical changes to take place?

Because despite the brilliant work of ‘alternative’ economists around the world like Mariana Mazzucato and Kate Raworth, when you start talking about carrying capacity, boundaries economies and sufficiency, there’s still a tendency for national, regional and local economic authorities to look at you like you’re bat-shit crazy. It also allows them a window of opportunity to position you as bat-shit crazy so that they can avoid considering the options for change.

I believe that opening up the potential of a bioregional economy requires two important things — both of which are nodal acupuncture points for change:-

Bioregionalism as an idea has been around a while. Like self-organising as a business model. A potential critique of it as a strategic tool is that it hasn’t yet taken off worldwide. Why?

I have often been asked this question in discussions around re-regionalising or re-localising economies. Sometimes an idea has to grow slowly until circumstances and context are ready for it. Bioregionalism as a concept originated in the US and Canada where there were indigenous people whose way of life was rooted in the land and from whom the community could learn. It appeared and has been experimented across wide tracts of land and geographies, sometimes in parallel with developments in regenerative agriculture. In her book on bioregional economies Molly Scott Cato highlighted three concerns that have to be overcome when you introduce the idea of re-regionalising economies as:-

Parochialism; it represents a return to a smaller vision of the world, a closed cultural approach with a rejection of ‘outsiders’, a potential for lack of imagination, experimentalism & growth, and a narrowing of cultural horizons — which has often characterised poverty in rural communities and which we still see today in some rural communities.

Balkanisation: the fear of creating hostile division between currently ‘whole’ states such as we have seen in Spain with Basque and Catalan movements; the potential for exclusivist or extremest philosophies, a lack of cultural diversity and the threat of insularity and racism — in short opening a window of opportunity for populist leadership to emerge

Stagnation: the fear of lack of dynamism which can occur in the mind when you take away the notion of constant growth in an economy which we are all primed and education to believe in

All of these three arguments are underpinned by the idea that we can’t possibly learn how to do things differently and that a bioregional economy would fall prey to these three possibilities — when of course we can — if we put a focus on creativity, imagination, innovation and design in our education programmes and business strategies.

It also doesn’t open the door to the possibility that smaller, richer, rooted in place communities can be wonderful places to live — when of course they can and are — once you look beyond the narrative of globalisation.

As is so often the case, it doesn’t hold space for the possibility that two conflicting ideas — that a small(er) regional economy could be satisfying and beautiful but also dynamic and creative and ever-changing — can both be true.

It also misses the dynamic and energy that is gradually emerging in the world which is about coming home. Coming home to place. After many years of learning; after covering subjects as diverse as developmental psychology, ecology, systems thinking, complex adaptive systems, agricultural and food systems, forestry, ocean acidification mitigation, facilitation, design thinking; there was a point where I though I would never find a new way, a new career, in which I could employ all these new insights and thinking. It’s still hard. But a couple of years ago I felt a sudden zooming in; a focus forming that was really about coming home. Rooting somehwere. Rooting my work in places around the world I care about.

I recently had a conversation with a very bright Danish colleague in leadership development. He has spent years working with executives and even leaders of nation states, shaping leadership and development programmes. And suddenly, inexplicable he is re-discovering the joy of writing in his own language. Of finding there are nuances and beauty and freshness of language he can use which is not polluting by the language of the corporate world. That’s not parochialism. That’s rediscovery of joy in your roots, in who you are and where your genetics come from. That does not automatically lead to balkanisation but more automatically to rootedness so that you can act both globally and locally.

One of the ‘stories’ we have learned to tell ourselves — and I have done this myself — is that small is boring, unambitious, dull. When I first started to engage with SMEs rather than global brands I found myself unable to help them because I had been trained to think one a global scale rather than a local scale. I found myself frustrated by the focus on the next sale and the desire to learn how to use social media rather than the social & environmental good they could incorporate in their work. But when I ‘zoomed out’ and looked at the inter-connected web of support SMEs give to any region, I saw a different story. One of wholehearted, hard-working people who create employment who uphold the fabric of society, who are determinedly supportive of developing a safe, welcoming neighbourhood. Who by small steps — from volunteering to clean the local pond to clearing land for butterflies to return — do actually build ecological capital. Who are the very urban and rural acupuncturists that Jaime Lerner encouraged in Curitiba.

In recognising the existence of constraints and concerns in the past, the answer is to design and lead the economy mindfully so that these three risks are mitigated.