An Economy of Place – Part 9 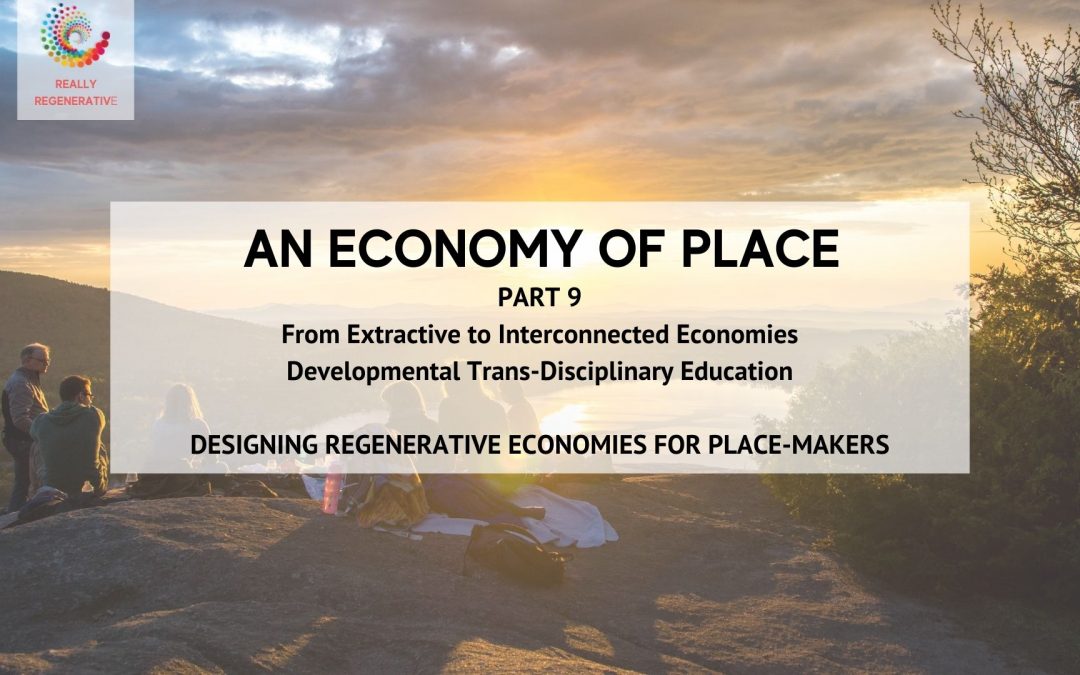 FROM EXTRACTIVE TO INTERCONNECTED ECONOMIES

In part 3 and 4 of An Economy of Place I mentioned several times the fact that living systems are evolutionary and developmental, and that regenerative economies by design should therefore also be developmental economies — always seeking to lift people, place and planet towards the next stage of evolution and development.

Can you achieve such a transformation without starting with system of education and the culture of parenting that is so influential in setting the foundations of how we think and how we see the world? It’s unlikely.

A regenerative economy must examine the way in which its education systems are designed, and start to shape a developmental and trans-disciplinary programme of education that takes into account the demands of our current complexity. You might think we have to start from scratch to do something so ambitious. But in fact, there have been some notable thinkers who were so serially ahead of their times that their stories are still not widely told. I want to highlight a few projects from which we can draw inspiration here.

More than 100 years ago, the eminent ecological designer Sir Patrick Geddes recognised that education could play an important role as trans-disciplinary integrator and facilitator of cultural transformation towards a sustainable human civilisation. As author Daniel Christian Wahl wrote of Geddes: “ …his aim was to engage in cultural metadesign and affect the social and psychological expression of culture through transdisciplinary education that engaged hands, heart, and mind. Culturally transformative education has to make explicit and challenge the basic assumptions that underlie the culturally dominant worldview. Geddes advocated a design approach that encompassed bioregional integration, changes in culture and worldview, as well as transdisciplinary synthesis and holistic education.”

Geddes holistic view of nature and culture working together underpinned his view that a successful shift towards a sustainable human civilization would depend on a shift peopleʼs attitudes, values, worldviews, and perceived needs. Geddes was essentially saying that education systems should be deliberate about including developmental psychology as a key practice across all education in some way rather than as a subject to study in itself.

At around the same time as Geddes work was flourishing in Scotland, a group of Nordic politicians got together and agreed that the best way to change the fortunes of their nations from a relatively poor agrarian society to a higher value economic output was a concentrated programme to lift the levels of consciousness of at least 10% of its young people. Between 50–90 specialist academies were built in Norway, Denmark, Sweden and some parts of Finland, and provided a cultural deep dive for young people.

Based on the lofty Germany concept of ‘bildung’ — the ability to control emotions, internalise societal norms and take individual moral responsibility — the cultural programme was adapted for relatively poorly educated peasants and agrarian communities that existed at the time in the Nordic countries. By including elements of the romantic nationalist that was emerging at the time in America and France, alongside the very practical industrialism of the UK’s economic powerhouse of the Victorian era into their programme, a pathway was developed which is today referred to as folk-bildung — a deliberately developmental pathway to lift everyone’s potential- invented some 100 years before Robert Kegan wrote An Everyone Culture. The rest, as they say, is history. We now recognise the Nordic countries as having superior social support structures and systems to many in Europe, if not the world.

When Donella Meadows formed the Balaton Group in 1982 she had been wrestling with the imperative, in her own words, of: “Helping people and cultures all over the world develop and express their own capacity to solve their own problems, consistent with their own needs and with the ecosystems around them. And doing that through enhancing the power within all cultures and peoples to combine intellectual knowing and intuitive knowing, reasoning about the earth and living in consonance with it.”

And then a vision started to form in her mind, again in her own words: “… of a number of centers where information and models about resources and the environment are housed. There would need to be many of these centres, all over the world, each one responsible for a discrete bioregion. They would contain people with excellent minds and tools, but they would not be walled off, as scientific centers so often are, either from the lives of ordinary people or from the realities of political processes. The people in these centers would be at home with farmers, miners, planners, and heads of state and they would be able both to listen to, and talk to, all of them.”

Each centre would build capacity to solve problems in ways that are consistent with the culture and the environment. They would collect, make sense of, and disseminate information about the resources of their bioregions, and about the welfare of the people and of the ecosystems. Although they would be partly data repositories, partly publishing and broadcasting, they would mainly be learning and teaching centres where iterative experiments could take place.Their role would be ‘to hold clear and true the context, the values, the ways of thinking, through which all development plans and resource management schemes proceed.’ Those values were to be sustainability (in the original Bruntland sense), high productivity/low waste, foster true human welfare, and incorporate regional appropriateness — and beauty.

What examples do we have today?

In 21st century we are finally catching up with what these visionaries saw over 100 years ago. And slowly Geddes work, the Nordic project, Donella’s vision — and the work of many other educational pioneers, are getting attention, inching towards the mainstream and brimming with renewed life.

Advances in developmental psychology have shown us the importance of deliberately developmental learning. From Montessori, to early years education, to Green School in Bali, to the much admired Finnish education system — education is changing, especially pre-University eduation. Thanks to a deeper understanding of sociocultural and attachment theories, cognitive development, social leaning, behaviour development, and psychosocial development, we have the capability to develop pedagogy from a very different base.

Specialists such as Robert Kegan and Lisa Lahey Laskov have extended this knowledge into the design of deliberately developmental organisations, to extend life-long psychological development into the workplace. Regenerative leaders like Carol Sanford, Pamela Mang and Ben Haggard at Regenesis Group have their developmental learning programmes and communities of practice for business and place respectively. Forum for the Future has successfully run the School for Systems Change learning programmes from the UK for a number of years now. All these programmes seek to create more capacity for systemic thinking within their cohort agents of change.

Bioregional and regenerative learning centres and communities are slowly beginning to appear around the world and gather together in different groups and communities. The Capital Institute’s Regenerative Communities Network hosts many different bioregions in the US and South America. Organisations like my own Really Regenerative Centre are slowly feeling their way towards the right model for the place in which they are rooted.

Large landowners such as Knepp Castle and Wiston Estate in the UK are reaching towards the uncertain future by embracing new visions of how they may best use their land to help a regenerative economy move forwards.

Agricultural technologies, architects and people interested in the future of work are galvanised to come together to explore a scaled vision of the eco-villages concept. Enthusiastic, galvanised communites like Re:Build and entrepreneurs such as ReGen Villages and Regen Network are pushing ahead with integrated urban and rural concepts, and high-tech land regenration programmes — with living systems principles at their heart.

Each are making their own unique contribution whilst slowly finding paths that bring them together in collaborations where they can leave the trained-in competitiveness of our previous culture behind them, and find ways forwards together.

I believe that is the work we now need to turn our heads and hands to, as well as our hearts. Place is the only locale in which change happens. Our local places need us now so that they can become the learning regions for long-term human development, climate resilience and regenerative development.